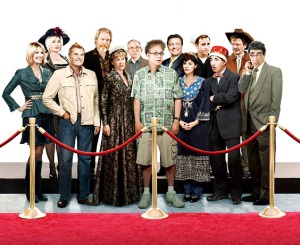 “A mirthfull mockery of movie land madness where the delusion of the characters is the only thing shakier than the walls of the studio sets in which they play out their stuff of dreams.”

Lights, camera, egos… is it possible that the Oscar buzz around someone’s acting skills in movie could begin even while the movie is still shooting?   OK…. but let’s just say that HAS happened — The media is rabid with rumours that working actress Marilyn Hack’s performance in the family drama “Home For Purim”, is Oscar worthy.

What mayhem could that cause to the cohesive collaboration of a consummate cluster of cast and crew?

Christopher Guest – and I’ve mentioned him in past reviews for his mocumentaries Best in Show, This is Spinal Tap and Waiting for Guffman, teams up with ensemble cast regular, Eugene Levy, to write this biting satire on fame, failure and fragility where the self image of the characters is the only thing shakier than the walls of the studio set in which they play out their stuff of dreams.

This is definitely less mocumentary and more scripted drama, but there is still a great sense of semi improvised mayhem as much of the developing storyline plays out as interviews and hosted segments on a Hollywood gossip show.

The depth of their shallowness is extreme.  Their banter and behavior is barely even pushed one notch past pedestrian for us to “get it” and for them to make the point – why does commercial TV exist?  To promote other things on commercial TV of course!

And while regular updates from the media circus centre ring ensure our propaganda presenters purposefully push the possibility for that paragon of prizes, we also see more and more of the unfolding of the movie within the movie – “Home for Purim” – as the cast and crew continue filming.

It’s a simple, touching, family drama set in the South in the 1940s… a dying mother, estranged adult daughter and a family truth that must be spoken… OK, its not Arthur Miller or Tennessee Williams exactly, ah, but it thinks it is.

The key ensemble cast, most of them survivors from past Guest films, all have their moment in a close-up… that’s metaphoric, not literal…

(reads long list of names)
… and so on and so forth…. as well as a few special guest cameos including; Ricky Gervais, Richard Kind and Sandra Oh.

Now, the people who make those infotainment sorts of shows do take their craft very seriously – some of them even think they are adding value to society.  So, if you are poking fun at their world don’t expect a mention for your new thing on their TV show… but clearly Christopher Guest doesn’t care and probably realises his core audience are not the types of people who either watch shows like “Hollywood Now” or buy into the hype no matter how many TV commercial spots are given over to it.  Like the seven discerning followers of these reviews, some folk just don’t take on board the bull not matter how it is served up.  But with that attitude, did perhaps this mirthful mockery of movie land madness backfire a little?

Earlier Christopher Guest mocumentaries were made on modest budgets, and likely made a modest profit, certainly “Best In Show” did, at least enough to justify another film a few years on, but if we can believe all we read on the inter-webs the budget here was around $12million… but it grossed only about $5million world wide… ouch!

Now, the old rule of thumb – a film has to gross about three times its budget to break even… given distribution, publicity and other costs.  So, by that measure, no one was planning an early retirement after this one.

“Inside the awfully good comedy For Your Consideration is a purely awful drama, dying to break out”
Michael Booth.

I hope he was meaning “Home For Purim” doing the break out.

There’s a slap!  But there was also some praise…

“Director Christopher Guest finds the absurd (and shares in the discovery with his cast) but always sees the human, tender truth behind the laugh lines.”
Tom Long

And I think Mr Long has recognised something that is under the skin here and also in Best in Show… Guest loves his characters.  He recognises they are flawed, some of them reckless and selfish but some also shows signs of fragility.

We saw it in the hunting dog owner, played by Guest himself, in “Best in Show” and here we see it in Marilyn Hack, and her ultimate buying into all the hype around her…. This self aware woman, fed a taste of the drug of desire, ends up hooked and… well, you’ll have to see the movie to see how that slide into delusion plays out.

Catherine O’Hara, another long time Christopher Guest alumni, is wonderful as Marilyn and as the Jewish mother in “Home for Purim” where she delivers an outstanding fourth rate performance.

Acting that bad can only come from someone who is actually really, really, good!  And her transformation from slightly frumpy middle age to a reinvented self is both shocking and pitiable – some of that tender truth behind the laugh lines.

–  Extracts of an interview with Christopher Guest and Eugene Levy…
https://editorial.rottentomatoes.com/article/for-your-consideration-christopher-guest-and-eugene-levy-probably-wont-read-this/