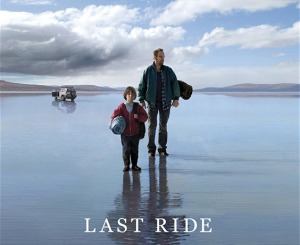 “Like any kid, who got the half full lunchbox when the emotional support was being handed out, Chook doesn’t want to disappoint his Dad especially when Dad is offering to take him on a great adventure.”

Sometimes a film slips so silently through the cracks it barely registers a stir in the mind of the public.

A few die hard “I see everything” types know of it, a few people attending a film festival might have seen it, and then it sort of vanishes.

Sure it gets a nomination or two at some film awards or other but doesn’t win and that’s that – story over – vanishes from sight.

Here’s an Aussie film from 2009 that did just that. I came across it via an online search for something else, and thought, “O.K. I’ll give it a go”. By the end of the film I turned to the friend I was watching it with and said, without any hesitation, “That’s probably the best Australian film made in the past ten years.”

Why had neither of us ever heard of it?

This is Last Ride.

The basic premise of a criminal on the run with his kid, trying to bond with the boy in the process.  We’ve seen similar scenarios before but they are usually about the strengthening and deepening of the relationship of the central characters.

What makes Last Ride special is the way it bends every possible plot and character trajectory around 180 degrees from what movie convention MIGHT dictate and in doing so makes the experience deeper and more believable.

Hugo Weaving plays Kev. He’s had a checkered past and exactly why he’s on the run with his 10 year old son, Chook, played by Tom Russell isn’t exactly clear at the beginning, but, we go on this journey with them, and we’re fed little nibbles of information building details of the recent past.

In an early scene Kev and Chook drop in on Maryanne ex played by Anita Hege. In an interesting exchange between her and Chook there is a hint of what may follow. We certainly get the idea that Kev is a bit rough around the edges but does Maryanne know something of a more abusive side to Kev?

Mac Gudgeon’s script, based on the novel by Denise Young, takes every opportunity to challenge assumptions – the innocent child, being protected from harm by the avenging father, a misunderstood bad guy with a heart of gold…. yeah, that’s pretty much how it would play out in a telemovie of the week, but here Kev’s inner demons do surface and we’re confronted with a few conundrums.

Last Ride starts in the middle of the story then through a series of well punctuating flashbacks, the history is built telling us how Chook and Kev got to be where they are, both physically and emotionally, and exactly why they are on the run.

There was more than just an echo of the similar technique used in Esben Storm’s non linear Aussie road movie IN SEARCH OF ANNA, made back in the late 70’s, and like that film, the filling in of past events definitely reshapes how we react to what’s happening in the PRESENT of the story.

Like any kid, who got the half full lunchbox when the emotional support was being handed out, Chook doesn’t want to disappoint his Dad especially when Dad is offering to take him on a great adventure.

But Kev is not exactly the ideal Dad in fact he’s severely damaged goods and while HE thinks he’s the hero of the piece at the start, in one of those 180 degree turns I mentioned, we see his hair-trigger temper and violent outbursts begin to surface.

Chook begins to see the chinks in his old man’s armor and the reality of their situation.

You might think… what? Chook’s only ten years old? He’s given to fantasies himself but what’s happening to Chook is an express coming of age process. We discover that he’s very capable of differentiating black from white, good from bad AND seeing the shades of grey in between.

So was the dire situation Dad rescued Chook from maybe not so dire after all? Have Kev’s assumptions and unmanageable anger really just made everything worse for everyone?

It’s a complex and fascinating study of two people and it’s realised with great skill by director Glendyn Ivin. He artfully uses the ever widening landscapes, and silences rather between Chook and Kev to shape our understanding OF them. We don’t need words to tell us what’s on their minds.

Then there’s the scene on the lake – I’ll just say “wow”. It’s poetic, metaphoric, dramatic, and a visual treat like nothing I’ve seen before.

It may seem stylised almost surreal in a film that, to that point, is built on a strong sense of the ordinary but the lake scene propels the two characters and the film as a whole into an act three that defiantly does not wimp out for even a second.

Interestingly the DVD release from Madman Australian is lavish – with a slip cover a booklet containing some stunning photos, a director’s diary covering the six weeks of principal photography, souvenir postcards and double disc with a whole highway full of extra features.

Someone clearly had faith, and a budget, to spend this much time and care on the packaging… For a film that only three men and a dog saw in its cinema release??? If someone can provide a genuinely informed answer please let me know…

I was going to end this with a terrible pun like “Last Rid is no dead end” but I guess it really did in fact reach a VERY dead end… it grossed less than $350,000 at the Australian box office.

Roger Ebert, the Pulitzer Prize winning master of the movie review maxed out his own star rating on it – yes the most widely published film critic on the planet heaped superlatives but still no one was interested – Last Ride didn’t just fall between the cracks, it plummeted fast and deep.