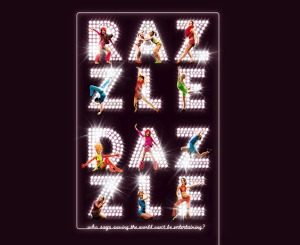 “What Razzle Dazzle is bravely saying is that dance schools are not about enriching the lives of the students, no. They’re about filling those empty vessels of dream and desire for the teachers and the parents – and that is where the movie hits the jackpot.”

I have a pet theory and I’m probably going to be abused for stating this but Australia often has problems making decent comedy movies – here’s a challenge, name five, just five, that stand up to the test of time or even the test of a second viewing?

You’d think with all that white-fella culture from Irish convict ancestors that Aussies would know how to laugh at themselves, and make others laugh, right?…. but over the generations the funny gene seems to have been bred out… Too much time in the sun maybe?

Perhaps the conventional comedy film genre has been the problem and here, with a different perspective – a mocumentary – suddenly something is working and working very well – Razzle Dazzle definitely dances right right up to the footlights and takes centre stage.

Films like This is ‘Spinal Tap’, ‘Waiting for Guffman’ and ‘Best in Show’, all created by and starring Christopher Guest (and guests), have pretty much cornered the mocumentary market and turned in consistently clever and very entertaining offerings. The Guest model is to use the same core of actors and to largely improvise the dialogue around key plot points.

Razzle Dazzle is not quite as free form – it has a very defined script and dialogue but the actors so completely inhabit their characters it feels fresh, alive and in its own way very real.

Miss Elizabeth is a strict disciplinarian and the success of her students in competitions proves she’s right, of course.

Mr Jonathan on the hard is far more organic and devising dance routines that have a strong social conscience like the oppression of women living under the burden of a birka and with the fear of firearms all about is naturally something every pre teen tapper yearns to explore through creative expression, right? Yeah, Mr Jonathan is a little out of sync with the kids, as is Miss Elizabeth, but in very different ways.

What Razzle Dazzle is bravely saying, that no Step-up sequel has dared to reveal, is that dance schools are not about enriching the lives of the students, no. They’re about filling those empty vessels of dream and desire for the teachers and the parents – and that is where the movie hits the jackpot.

As the stage Mother from Hell, Kerrie Armstrong totally shines. Her Berocca breakfast and the dance routine with her daughter at a back yard party are bend in half laughing moments. She is wonderful.

But wait, there’s more. The support cast all have their moments to in the sun – Toni Lamond (I personally consider her a national living treasure) absolutely nails her mock interview scenes as Sherry Leonard, expressing an exuberant devotion to the art and tradition of dance competitions – beautifully counterbalanced by the other judge, a strategically poker faced Noelene Brown who’s one line of dialogue is a gem.

Tara Morice, so, so funny as Mr Jonathan’s mute costume designer, Marianne, and as a remarkably normal single mother in the midst of the madness, Nadine Garner adds a much needed grounding touch…. then there’s Denise Roberts, oh my, this woman plays “mocumentary” as if she’s been doing it all her life – such a brilliantly conceived character deploying a rather unconventional recruiting method for new dance students. Her actions may seem exploitive, even criminal to some, but if it gets the job done what’s so wrong with the occasional kidnaping?

Ten points to the script writers, British comedian Robin Ince, Carolyn Wilson and director Darren Ashton, squeezing so much life into the characters and so many laughs out of the action.

One final element to applaud are the dance routines choreographed by John O’Connell who totally got what was needed here – deep ideas, layered with energy and topped with tackiness. Through dance we come to understand that oppressed women can indeed be set free – all they need are new hairdos.

And to the kids in both Miss Elizabeth and Mr Jonathan’s dance troupes – ten points.

If you have kids who have ever been in a dance school or if you were one of those kids dutifully doing your jazz, tap and ballet in a long past decade, you will no doubt see some familiar situations on the screen.

I recall seeing Razzle Dazzle the day it was released, an early afternoon session with just three people in the audience, myself included. Two of us laughed out loud and the third person left half way through!

Now I know the film divides audiences – some people hate it, and I do wonder if that’s because of the subject matter (do you have a phobia about tu-tus, tap shoes and sequins?) but I suspect it’s more likely that some people just don’t get the genre.

The usual cues of what’s funny and what’s not aren’t present in a mocumentary. Like a TV sitcom without a laugh track, you’re on your own to decide what’s funny and what’s not and “jokes” are not set up in dialogue – they are in the situations and the gulf between what a character says about themselves or others and what they are actually doing – their own self delusion is a big part of where the humour lies – getting inside that requires an enquiring mind and an understanding and appreciation of irony – and that’s why the Americans didn’t get it…

But, if you CAN appreciate that rare bird of filmic mirth, the mocumentary, Razzle Dazzle dances up a storm of dark and biting…. but hiding in there is also a very warm heart.