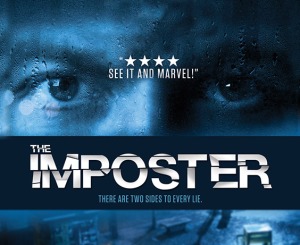 “As a piece of entertainment The Imposter is as tight as any scripted thriller and when most thrillers start to lag and get a bit soggy, this film goes from intense engagement to an all out OMG with an amazing twist in act three.”

The Imposter won the Grand Jury documentary prize at the Miami International Film Festival; nominated at Sundance, nominated for the British Independent Film Awards; screened at the Sydney Seattle and San Sebastian film festivals, various film critics Circles or Associations – Georgia – winner, Kansas City – winner, London – winner,  Australia – winner; and even shortlisted for an Oscar – all for your consideration – as “best documentary”.

Maybe it would have done even better in the “best drama” category… After all, most of what you end up seeing on screen and certainly all the memorable visuals are completely staged.  So, when is a documentary not a documentary?  The Imposter certainly walks a fine line.

One dark and stormy night, in Spain in 1997, a boy is found by Police in a telephone box.  He has no I.D. He is frightened, traumatised.

Is he who he claims to be?  How will the boy’s family, react when they are reunited with him? He doesn’t look anything like the missing boy and what about the fact that he speaks with a distinctive French accent?  How much deceit? How much gullibility  and how much denial can there be in one story?

What’s on the boy’s mind?  He tells us – “I had to be convincing… I had to put into their mind they had a kid in front of them, not an adult.”

He’s a fake, an imposter of… No body… But as he says, “From as long as I remember… I wanted to be be someone else… Someone who was acceptable.”

Those are not spoilers, we’re just five minute into the movie when we find that out and from the mimic himself.  The “story” is ultimately how 23 year old Frederic Bourdin, fooled Police, child agency workers, court officials and most of the family of the missing boy, that he was 17 year old Nicholas Barklay from Austin Texas.

You think, what?  How could he get away with it?  Skill, luck and an exploitation of a deep human need – people WANT to believe.

The backbone of the film is built from interviews, with Bourdin himself, cleverly staged speaking directly to the lens in a tight close-up.  You are forced to engage with whatever he tells you – he’s staring right at you, into you, recounting not just what he did, but intimately presented are also his thoughts and feelings at the time he was proffering his prank. It’s an amazing portrait of a person who is, considering what he gets away with, possibly the finest living actor in the world!

The thread of neatly edited interviews slowly reels out the twists and turns supported by some home videos, old TV news reports and a few dramatised recreations… OK, let’s be honest here, it’s sometimes scene after scene of dramatised recreation – art directed, illuminated, photographed, edited, underscored, sound mixed with as much care and detail as any costume drama.  Are we watching a documentary of excerpts from CSI Austin?

A while back I presented a review of the film HELL AND BACK AGAIN about a soldier in the Afghan war, returning to life in the USA.  That was totally cinema verité – no interviews, no dramatic recreations – about as doco as a doco can be.

Here however, the “interview” with Bourdin seems very carefully controlled – dare I say at times even contrived… but then would he, as the great chameleon, want it any other way?

There are two or three very interesting techniques used in the film from time to time.  When other interviewees are talking about their thoughts on Bourdin,  was he maybe not who he claimed to be, there are a few insert cuts of Bourdin just looking at the camera, a slight smile, a “knowing look” which of course could be taken from anywhere in his “interview” and inserted – a way that editing plays a role in layering the experience we have of him “reacting” (that’s questionable) to what’s being said.

The other technique, is to take lines of his interview and have the actor playing him in the dramatic recreations actually recite the same line and then use the audio from Bourdin’s interview over the the visual of the actor in the recreation – it’s certainly not a new technique but it works here very well – as if the images we are seeing are Bourdin’s imagining of what happened, as it happened, not some third party’s imagining of it after the fact.

A third piece of trickery is to have actor Adam O’Brien, playing the younger Bourdin, actually replicate some of the movements Bourdin does in the interview and then inter cut the two versions of the same physical movements.  At one point there is even a shot of O’Brien in two different imagined guises of Bourdin in the same shot… yes, it could be said all tricks for the sake of tricks but they do add a constant sprinkling of spice to what’s happening as interesting – creative little bon-bons of fun.

Does it sound like I’m coming down on this film?  Absolutely not.  It was one of the ten best films I saw all of last year.  I didn’t see it on the film festival circuit and unfortunately only came to it later on DVD (which I had to have imported from the USA.  Six months later at the time of writing this review, still no Australian Blu Ray edition.)

As a piece of entertainment it’s as tight as any scripted thriller and when most thrillers start to lag  and their act three gets a bit soggy and you see all the stepping stones laid out to the inevitable conclusion, not here.  The Imposter goes from intense engagement to an all out OMG with an amazing twist in act three.

Top marks to the editor Andrew Hulme – a master of the pregnant pause in an interview – knowing just when to leave the interviewee hanging in space after making a statement that blows our perceptions of what’s happening in a whole other direction.

And to the director, Bart Layton.  You’ve done a great job mate. Congratulations!

So, documentary or drama?  The jury is still out on that question.  Either way it toys with our senses like a cat with a mouse, and we, the audience are definitely the rodent in that scenario.  If you seek suspense by the spade full, infused with intrigue and a gut full of gullibility, Texan style, don’t miss Mr Bourdin’s masterful masquerade – The Imposter.

A RAW Production in association with Red Box Films and Passion Pictures for A&E IndieFilms, Film 4 and Channel 4.

Further information:
Interview with Bart Layton about the film:

‘The Imposter’ Director Bart Layton: Making the Film Was ‘A Bewildering Experience’

These elements are reproduced with the intention of “fair use” for the express purpose of review / critique of the film.