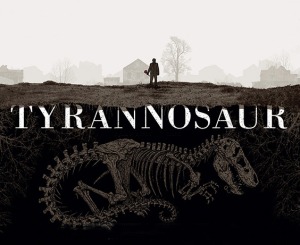 “In Tyrannosaur You will hear the “F” word 11 times and see a man kick his own pet dog to death – no, that’s not really a spoiler – it’s in the first 58 seconds of the film.”

Have you ever wondered what it’s like to be slapped around the head for 90 minutes with a baseball bat?  I’d not pondered the thought until encountering this film – the two experiences I imagine are much the same.

While the title suggests another chapter in the Jurassic Park canon, the scary monsters present here are very much internalized creatures of the ID.  This is Tyrannosaur.

You will hear the F word 11 times and see a man kick his own pet dog to death – no, that’s not really a spoiler – it’s in the first 58 seconds of the film.

So, with an opening like that I’m pretty sure the writer / director is telling an audience, “don’t expect this to be a pleasant picnic in sunny Yorkshire”.  What’s delivered is one hell of a bleak vision of life in an English town.

You can almost hear the echoes of those grey, British, 1960’s kitchen sink dramas, full of frustrated and angry working class mean and socially and sexually disenfranchised women, all handcuffed to an ignoble existence.

At first glance they look like victims of a systemic class-defined poverty, but the real demon is usually revealed as stunted emotional growth, fed by fear and self loathing – the problems are internal, not external.

Fast forward half a century and nothing has changed for this too is the emotional landscape of Tyrannosaur.  The characters are just as out of kilter with their own aspirations and the locations are just as bleak with modern colour film not helping one bit.

Tyrannosaur started life as a short film written and directed by Paddy Considine.  As an actor you might have seen him in the cult 24 HOUR PARTY PEOPLE, as the underemployed actor/ father IN AMERICA and as the journalist in episode three of the JASON BOURNE SHOW… but in 2007 Considine’s first directorial effort, a 16 minute short called DOG ATLTOGETHER, barked loudly and gained the attention of many… in fact it won the BAFTA award for best short film.

The premiss of the short – a man kicks his dog to death… hang on, isn’t that what happens at the start of Tyrannosaur?  Yes. Tyrannosaur is effectively a remake of the 16 minute short PLUS an additional 75 or so minutes of, “what happens next to the character of Joseph, that’s the dog kicking man, and Hannah, the kindly lady in the Christian Charity shop.

In writing Tyrannosaur Paddy Considine started exactly where DOG ALTOGETHER left off. Hannah offers Joseph a cup of tea, he, “assaults her character… all these preconceived ideas he has about her life, just face value… O.K. let’s see if you’re right… and he couldn’t have been more wrong.”

I don’t want to be tossing spoilers at you but while Hannah looks like a happy and content church lady on the surface, her emotional burdens make Joseph’s look positively plain.  Still, Hannah appears to interact with the world in a functional way, offering prayers to the sick, playing compassionate wife and spray-and-wipe house keeper of the year.

What happens to her is both harrowing and bewildering – so entrenched in trying to make her impossibly wrong marriage right again, reveals a truck load of fear, denial and guilt in her failure to be able to fix what’s around her.

I know a few people who didn’t make it through this film because of what Hannah faces – it was just too confronting.

Olivia Coleman – sighted in films like THE IRON LADY, HOT FUZZ and HYDE PARK ON HUDSON, and the Brit TV series PEEP SHOW, REV and BROADCHURCH, blew me away when I saw her in this role. It is edge of your seat, lip quivering stuff, and I’m talking about my lip, not hers.

The fragility, desperation and suppressed anger make for a mesmerising emotional cocktail.  It’s a case of watching an actor strip away all artifice of technique and present a rawness that is at times hard to watch – I felt like I was intruding.  We’re not playing a game here – actor and audience – where we know it’s just pretend and that’s a kind of agreed contract that means I’m not really having to face truth sitting out here in the dark watching what that woman is doing on the screen.  Naaaa, Olivia Colman tears up that contract, tosses it away and she’s not letting the observer off the emotional hook for a second. You feel it as if you are standing in the room with her, not observing her on a screen, and that’s just too real for some people to cope with.

I can think of maybe only five or six other scenes in films where I have felt like that – just moments in a film – but Olivia Colman keeps it up for the full running time.

For anyone serious about studying acting watch this film!  Watch her!

Very high praise also to Peter Mullan – if you’ve seen Jane Campion’s very moody mystery thriller, TOP OF THE LAKE, you’ll probably recognise him.  It’s interesting to see how clearly defined Mullan’s character of Joseph was in the original short film and there was a little hint there that didn’t make it to Tyrannosaur.  It’s a moment when he opens a drawer in his bedroom and it’s littered with all manner of half consumed pill packets and bottles.

You don’t have to read between the lines to see that Joseph’s instability is at least partly due to a diagnosed mental illness and he’s been through all manner of medication to help balance the turmoil.  A couple of times you’ll hear him responding outwardly to an inner dialogue.  Interesting that the drug control reference was there in the short but not in the feature.  Would be interesting to find out why the choice was made to drop that angle on Joseph.

Hannah says to Joseph at one point, “I feel safe here” and his reply, “nobody is safe with me.”  Here is Hannah, feeling “safe” with a self ware man who kicks dogs to death?!?!  That’s one damaged woman!

Reading comments online, some people found the final reveal of Hannah’s actions to be extreme and unbelievable. There’s something for debate. Even Paddy Considine said the piece was almost “old testament”… and I’m with him in that – the brutality, revenge and seeking salvation runs deep and repeatedly through the film in both theme and literal action.

The players lives are seemingly cursed, forever in colliding circles of poor judgement and external forces that perpetuate a kind of ritualistic chaos.  Joseph, like Orestes, possessed by the Furies, and Hannah like a sacrificial Iphigenia, unable to escape the brutality forced upon her but still praying for intervention.

She maintains some belief in a God that is all forgiving and that her pious acts will somehow re-balance all the negativity.  Girl, get a grip on it, please!  Sometimes you just have to wipe the slate clean and start again – and the film asks, “can one significant blow, if it’s big enough, cleanse the bloody path that has lead to it or is it just perpetuating the cycle?”  Mmmmmm.

Despite all this, Tyrannosaur is still a story of hope.  Did he just say “hope”?  Yes I did.

By mid way through the film you will see the foundations of an understanding between these disparate and desperate people begin to emerge, but, don’t be fooled, you can still catch a rerun of FOUR WEDDINGS AND A FUNERAL on tele if you want a pat ending.  In tales involving this much anti social behavior, retribution will always be waiting in the wings, ready for a quick entrance.

On the film festival circuit Tyrannosaur won a lot of attention. Olivia Colman picked up a truckload of acting awards from wreath tossers in places like Croatia, Greece, Sweden, France, Germany and Romania.

At Sundance both lead actors and the director collected trophies.

Overall the film picked up more than 30 international awards – for the actors, writer / director and quite a few “best film” gongs.

If you do a little on-line hunting you can find interviews with Paddy Considiene and the cast of Tyrannosaur – try the British Film Institute web site.  You might also be able to find ‘Dog Altogether’, the original short film, on the Tubes of You – an interesting comparison.

Is it a real stand alone piece or just an audition to get funding for the feature? Feel free to discuss that idea.

Weakest element?
The last five minutes or so… are they really necessary?  Could the film have ended at… well I’m not gonna tell you but you’ll figure out the dramatic climax, and if it did, what consequences would follow?  Worth a thought.

Strongest elements?
–    rock solid script – top marks Mr Considine
–    two of the most amazing performances I have ever seen on film let alone in the same film
–    atmosphere – a difficult thing to define but it’s a combination of lighting, art direction, pacing of editing and use of sound are all elements that cooperate to create an atmosphere.  The very sparse music score also augments the visuals adding detail on a totally other level, to the edgy inner world and the bleak outer world.

It’s interesting to see what other reviewers had to say.  One comment I thought particularly insightful came from Peter Bradshaw for THE GUARDIAN who described Tyrannosaur as,
“an examination of people who create their own ecosystem of anger and unhappiness.”  Well put.

Here the habitat, that bleak town, feeds on itself.  It’s a toxic place indeed, but to the animals who inhabit it, well, it’s just home.

The suggested “Further Information” links are correct at the time of publication. Newtown Flicks can not be responsible for content moved or deleted from other sites.

All rights to the film under review, including related promotional elements (e.g. video clips, freeze frames, production stills, posters, box cover art, etc) or materials relating to the documentation of a film’s production (e.g. “on set” or “behind the scenes” photographs or interview comments from cast or crew), remains the exclusive property of the originators / legitimate owners of those elements.

These elements are reproduced with the intention of “fair use” for the express purpose of review / critique of the film.

Newtown Flicks claims no ownership of this pre existing material and is diligent in ensuring its use of the material is restricted to the relevant video review and related web site known as BETWEEN THE CRACKS.